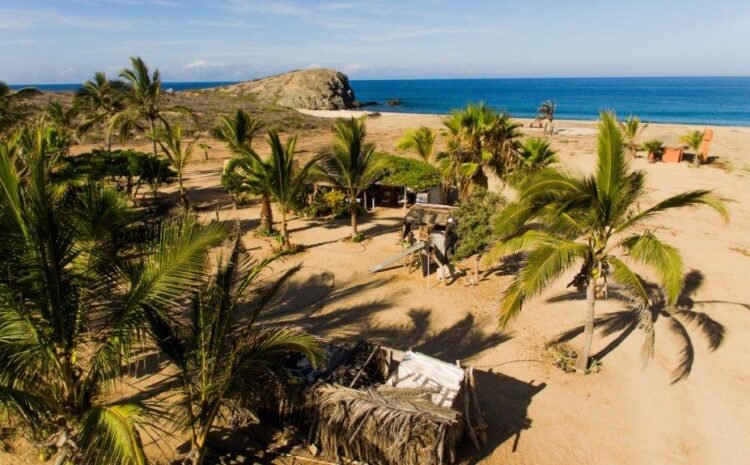 How many times have you driven past Km 83.5 on the federal, main Highway 19 between Cabo San Lucas and Todos Santos and asked yourself, “What is going on there?”

You see hundreds of coco palms and the famous hill that drops off into the sea. But what you do not see is the abundance of exotic plants and wildlife.

At Rancho Gaspareño, the recent focus has been experimental organic agriculture and the development of a low-key commercial coconut plantation enterprise. On the ranch, many different herbs can be found growing in their natural habitat, one in particular, Damiana, is native here and grows in very few other spots in the world. Damiana is the aphrodisiac of the Aztecs. Legend has it the Aztecs would send their emissaries here to trade with the Guyacura Indians for this precious little plant. It is also quite well known for its benefits of curing anxiety. Google and see! Other organic plants that grow unassisted on the ranch are Oregano, Jojoba, Neem trees, Aloe, and many more.

Here is a bit of history of the Ranch and the surrounding area;  In the Mexican-American war, 1846-1848, battles were fought inland of Rancho Gaspareño. It is one of a few places where the Mexican Army prevailed before the final agreement was made and the American troops were withdrawn. The Mexican nation retained Baja California in the Treaty of Guadalupe Hidalgo. Mexico was forced, against its will, to relinquish over 55 percent of its territory to the United States. Mexico lost much of what are now the states of Texas, California, Nevada, Arizona, Utah and Colorado. All properties north of the Rio Grande were the undisputed property of the United States. Mexico was paid $18.6 million for giving up these lands.

The 42-acre Gaspareño Ranch includes land on both sides of the highway. Animal life abounds. Wild animals include; numerous wild pigs, mountain cats, deer, herds of wild donkeys, descendants of the ones brought by the churches, many types of eagles, hawks and falcons, snakes of many types.

On the ocean side of the highway can be found various types of sea birds and creatures as well as some of the best shore fishing anywhere. Directly in front of the Ranch, there is a deep-water trench that runs south to the Cabos into the Sea of Cortez, where you find the big-game fish that the area is world-famous for. During the season, you will also find large groups of lingering whales very close to shore you can almost touch them, oftentimes frolicking all day. Also, in season, you will find many turtle tracks where mothers leave the water to deposit their eggs in nests that they dig the previous evening on the beach …

So now the cat is out of the bag, “The Best Kept Secret …” is no longer a secret. By the way, I understand the property is for sale, at the right price.

EDITOR’S NOTE: Rancho Gaspareno is for sale. The 42-acre property is a terrific investment opportunity with a plethora of options for development. For example, a hotel(s) site, villas, condominiums, large luxury lots, an extended care facility, etc.