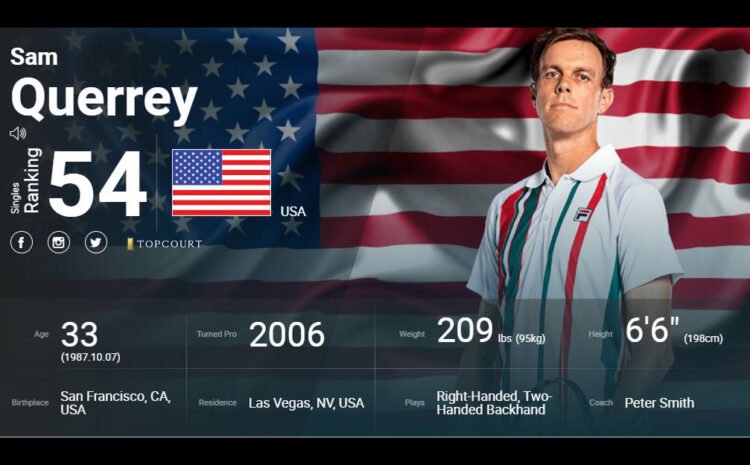 I first had the opportunity to meet and watch tennis player Sam Querrey when he captured a prominent U.S junior tournament in his age bracket (16’s) at the 2004 Easter Bowl. He was only 16, but he stood out from his peers in my mind because he already had the makings of what it takes to succeed on the pro circuit. Many players at his age are like human backboards. Not Querrey. His game was reminiscent of Andy Roddick’s, the number one American on the pro tour and current U.S. Open champion at the time. Sam’s game plan was built around a crushing first serve and a lethal forehand. And like Roddick, Sam would run around his backhand whenever possible and unleash devastating inside-out forehands which oftentimes ended up as clean winners.

In July of 2007, in the quarterfinal of Indianapolis, Sam Querrey served notice to the tennis world that he was the real deal when he uncorked 10 Aces in a row against compatriot James Blake, setting a new record on the ATP World Tour, finishing the match with a total of 34 aces and dismissing Blake in three sets to reach the semifinals — his best career result to date.

Viva Las Vegas! On March 9th, 2008 a 20-year-old Sam Querrey reached another career milestone by winning his first professional tournament at the Tennis Channel Open in Las Vegas, Nevada. At the time, I was the Director of Media for the event, and was present for all his press conferences and his championship match. I’ll never forget the look of pure joy on his face when he hoisted the hardware during the post-match on court award presentation. After the match Querrey said: “It’s very special, especially because I lived here for a while and I still have a lot of friends here.”

Flash forward to 2017. The same game only bigger and with much-improved footwork and fitness. That year Querrey would go undefeated in Mexico. First, he captured a 500 event in Acapulco by stunning none other than the greatest competitor of all time, Rafael Nadal, in the final. Querrey recalls, “I really loved the atmosphere in Acapulco. The fans were amazing and I fed off their energy which lifted my level and allowed me to let my game fly especially in the final against Rafa.” Indeed, that title lifted Querrey’s game to great heights, as he would reach the semifinals of Wimbledon that summer. So, a few weeks later when he landed in Cabo for the Abierto de tenis, his game soared again capturing the Cabo crown. “When I won Acapulco and then Cabo I felt like the man down there,” Querrey recalls.

I caught up with Querrey two weeks ago by phone when he was in Mallorca, where he reached the final, losing to World No. 2 Daniil Medvedev. Although he was the runner-up, Querrey’s ranking improved from 60 to 53 for his result in Spain.

The affable American has fond memories of playing in Cabo. “I love playing in Cabo. The matches are played at night, which is nice not having to deal with the sun when you’re serving. Plus, it’s so brutally hot in the day there that time of the year.”

Sam Querrey was born in San Francisco. His family moved to Las Vegas in the mid 1990s. From 1995 to 1998 Sam grooved his game in the desert, less than 30 minutes from the Las Vegas strip. But he spent most of his formative years in southern California, a hotbed for tennis. When he became a pro he often trained at the USTA Carson facility. When I was the assistant producer of a documentary about Sam’s tennis life, I spent a good part of one day observing him train. While Querrey embodies the classic stereotype of a laid-back Californian, he’s a workhorse and puts in the hard yards on the track and at the gym. “It’s not like in the juniors. When you become a pro you’ve got to work your butt off on and off the court. It’s so competitive out there, especially these days. If you look around the locker room you would swear that some of these guys live in the gym.”

But don’t let that fool you. Sam still likes to enjoy the perks of being a pro on the ATP World tour. “I’m telling you those parties after I won those tournaments in Cabo and Acapulco were epic. And the cool thing about both events is that they make it so fun for us during the tournaments.”

During the course of our interview, I let it slip that I live here. Querrey replies, “Really dude. I don’t blame you. We love Cabo. I can take my family there and they have a great time. The tournament hotel hospitality is so awesome.” I asked him if he’s ever considered getting a place in Cabo. “You know I now live in Agora Hills (a suburb of Los Angeles) and Cabo is an easy flight from L.A. So, we can come down and visit because it is so convenient from where I live. It’s definitely one of our favorite places to go.”

As the interview came to a close, I kiddingly asked him why I had to wait more than 10 years to get an interview with him again? In classic Querrey style, he called me out. “Where the hell have you been the last 10 years? Oh, let me guess. You’ve been hanging out at Cabo Wabo.” Guilty as charged.