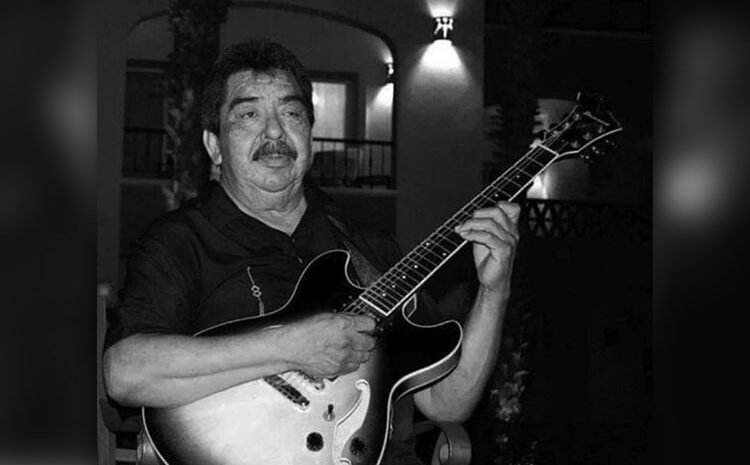 Los Cabos recently lost one of its iconic and legendary masters of the guitar, Felix Figueroa Agundez. He passed away during the early morning hours of June 24 in La Paz, at 67 years of age, from a heart attack he suffered two days earlier. Everyone that knew the gentle, quiet, humble and exceedingly talented Felix was stunned and shocked to hear the news of his passing.

“Gonna miss him so much. Such a beautiful and talented gentle soul. The past two weeks have been so heartbreaking,” said Kathy Billie Daniels, singer and owner with her piano-playing husband, Marty, of Two for The Road Jazz Club.

The Governor’s office released the following statement: “The Government of the State of Baja California Sur through the Instituto Sudcaliforniano de Cultura and all of us who collaborate here, deeply regret the death of Felix Figueroa Agundez, renowned South Californian musician. We hope that family and friends will find strength and peace in their hearts to overcome these difficult times.”

“The news of his passing is unimaginable and so hard to accept,” said Lisa Saunders, lead singer of the Caborado Band. “I am so grateful to have had the opportunity to meet him. He was always so kind and respectful to me. I remember way back when I first met him in the early years of 2000 something. I was completely blown away by his sound and his mastery of playing the guitar. I am so privileged to have worked on different projects with him from Brian Flynn gigs, Cabo Cowboys, and then, what an honor it was to have him play the first year of Caborado along with Mauri Acuña. Felix always welcomed me from day one and continued to do so as long as I have known him. I will miss his gentle spirit, sweet smile and smooth fingers that played like no other.”

“What a dear soul he was,” added Lyn McAlister, a local ex-pat. “How he made his music talk. Truly loved him. He always greeted me with a big smile and would play a special Santana song for me.”

Born in Mexicali, Baja California, of Northwestern Mexico, Felix Figueroa’s family moved south and he was raised and grew up in the Southern Baja California Capital city of La Paz.

“Cabo has lost an amazing talent,” said Judy Baggiarini. “Felix played at Beso Bar many times. He was so kind, soft-spoken and had the biggest, warmest, most welcoming smile for everyone.”

While growing up in La Paz, Felix started playing guitar during his childhood and youth, which eventually led to him joining his first band when he was only 14 years of age in 1968.

The six-piece band, with Felix playing lead guitar, was known as “The Wanders” which was something between The Wonders and The Wanderers. During that late 1960s era, The Wanders performed all over the Malecon in La Paz at several popular live band bars and at occasional private parties and Saturday night Quinceañeras.

“I’m so glad that a lot of people recognize his talent and how humble my father was,” commented his daughter, Anai Figueroa.

Fellow musician and local painter and artist, Paco Serrano, likened Felix’s passing to the song “American Pie” by singer and songwriter Don McLean, whose lyrics sing about the deaths of musicians Buddy Holly, Ritchie Valens and J.P “The Big Bopper” Richardson in a plane crash on February 3, 1959. It was “the day the music died,” according to McLean, who was a 13-year-old paperboy at the time and mourned their deaths greatly. “I’m going to miss my Felix. I am very lucky to have a CD of his, the grandmaster of guitar masters.”

“It was with infinite sadness that I learned of the death of my dear friend Félix Figueroa Agúndez,” said Jose Luis Arias. “He was an extraordinary guitarist, an exemplary friend in his joy and humility, is an irreplaceable icon of the BCS music scene.”

For those that knew him longer, the pain of his passing cuts a little deeper.

“Before you left you were already a living legend, your story continues in the lives of all the hearts you touched,” lamented Mariana Estrada-Tallman. “What an honor my beloved Felix to have been your friend for so long. Incredible to think that last week was our last talk, as always full of love. A part of my heart will be forever broken because you will no longer be delighting me with your beautiful music.”

Others still, remember with fondness their relationship with the local guitar legend.

“On May the 8, we had a meeting with Felix. I stopped by the home of his great friend Homer that day and from there everything changed; it was an afternoon of talk, anecdotes, memories, and music that will remain in our hearts. Fortunately, and with a lot of effort, we managed to record some songs with Félix, and one of them is “El Rock del Yiko” sung by another good musician who crossed borders, our friend Daniel Tuchmann the great “Danny Boy.”

“We have been friends since childhood,” said Cesar Salgado Cota. “Nobility and humility were some of his greatest qualities. Felix was the kind of person who can be considered to be born for a select art, Master of the electric guitar. And he was definitely born to play and play beyond great.”

After that two-year experience of playing with a locally popular live band, Felix left The Wanders and began playing guitar with Los Pepes in 1970. And it was playing with Los Pepes throughout the 1970s that Felix earned his much-deserved reputation as one kick-ass guitarist, capable of playing American and Mexican songs of every genre, from classic rock to blues, jazz and songs by famous singers and bands of Mexico.

In 1985, after more than 16 years of playing rock and roll in his hometown of La Paz, Felix and two of his close friends and bandmates drove that two and a half hour trip from La Paz to Cabo San Lucas, on what was then a dirt and dusty road that links the two major cities of Southern Baja California.

“Felix was the greatest Choyero guitarist ever,” added Miriam Del Pilar Ceseña. “I loved him very much.”

Others thank Felix for his contribution to Southern Baja California music. In 1992, Felix and his Mr. Sushi Band were invited to play regularly at Cabo Wabo Cantina, which after opening in April 1990, had gone through two years of financial failure, leading owner Sammy Hagar to buy out his bandmates, and open the place under new management. By 1993, the bar became popular with both locals and tourists alike, as the once sleepy fishing village quickly grew into a major resort and vacation city.

After their brilliant and successful two-year run performing regularly at Cabo Wabo, the band split up and from there, Felix remained in Cabo playing with various groups and sometime thereafter, became best friends with Mauricio “Mauri” Acuna. The “two amigos” almost immediately became a household name in the Cabo San Lucas music world performing at such places as Cabo Cantina, Tanga Tanga, Corner Bar, Sanchos, Flip Flops, Fenway Bar, Two For The Road and the old, and unforgettable, Cabo Lounge.

”He was a super guitar player in all genres. I had the great privilege of playing with him a few times in jazz, blues and rock gigs and he was mind-blowingly fantastic. Such a natural, God-given talent far beyond the written note. He lives in my heart and my soul and my memory,” said Henry Korol, a La Paz ex-pat resident, originally from Alberta, Canada. ”I will always admire him,” added Jennifer Rayo. ”It was a pleasure to have met him and to have performed with him this path of music.”

With a memorable lifetime of playing guitar, Felix traveled and ventured to perform at such places like Loreto, Mazatlan, Ensenada, and Guadalajara, but always maintained his love and preference of playing at home in Cabo San Lucas. ”He was the definition of a gentleman. He was such a sweetheart who always had kind words, even though at times he was a little shy and reserved until all his emotions came out the minute he picked up his guitar and made it sing with passion and precision. He was a talent of epic proportions with a heart of gold,” said Nicky Oliver.

And Leo Vazquez agreed, saying that Felix Figueroa was a legend on the guitar and what an honor it was to have shared stages with him.

“Felix was an excellent musician, an extraordinary friend, a gentleman with all the extension of the word, and tireless warrior who always had a smile for everyone,” said Francis Peon Aleman. “Seeing him play guitar many evenings in Cabo will always be a highlight of mine,” added Andy Benish.

“It will be a long time before we see another musician like him in Cabo,” echoed Sergio Logan.

And nothing could be closer to the truth. Felix Figueroa Agundez was indeed a very unique, talented and unforgettable musician, friend, neighbor, and loved one that only comes by once in a great while. And fortunate are we. Everyone that ever met him, heard him, knew him and loved him.