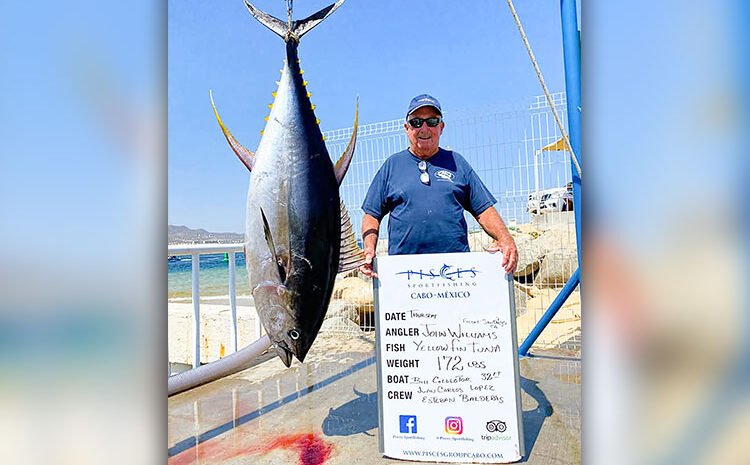 Baja summer fishing is on fire! Huge schools of yellowfin tuna, from football-sized to OMG-nearly-200-pounders, are often pouncing on brightly colored pushers and Rapala-style lures and Hoochies.

Add to that plenty of billfish (striped marlin and sailfish), along with a few dorado and a toothy wahoo or two, if you are very lucky.

The Pisces 28’, Andrea, seldom had anglers this year who are not smiling! On back-to-back days this Thursday and Friday they caught tons of yellowfin in addition to a nice sailfish released as well.

Mate Omar and Captain Roberto always work hard to put anglers on fish, and man, they take great pictures too!

When asked, Juan was on the dock the day before when the big ones would show up. “Any day now” he answered. “Maybe tomorrow.” Juan always knows where to find ‘em, consistently landing big YFTs early on in the season; this time John Williams on Juan’s boat landed the first one over 100-pounds for 2021. He caught it with a cedar plug on a 30# set up; it took about an hour and a half to land it.

WEATHER CONDITIONS: The sea temps have been from 75-to-79-degrees, clear and calm with 3-to-5-foot swells with light winds and afternoon air temps have been 73-to-88 degrees.

After water settled, clarity, and water temperature rebounded, we saw the yellowfin tuna bite pick up. There was an early bite for yellowfin in the 10- to 40-pound class on the grounds near Vinorama, within a couple of miles from shore. They would strike on sardina early in the morning, then as the sun rose higher, the action would stop, but not before some charters would report up to ten tuna. Additional tuna action was found over 25 miles offshore associated with the porpoise, which was more of a private boat deal. This tuna action was probably the highlight of the weekend.

Although there were no wahoo to speak of, we were seeing a scattering of dorado – just a couple of fish of all mixed sizes, including bulls up to 30-pounds.

Some charters ran into schools of baby-sized dorado, all catch and release. Billfish action was scattered – small-sized, very tiny striped marlin, as small as 40-pounds up to 70-pounds – with a few sailfish in the mix.

As far as catching numbers of good-eating fish, a great variety of fish was accounted for in the shallow water structure, triggerfish, pompano, island jack, surgeonfish, red, yellow, and rose snapper, barred pargo, bonito, Amalco jacks, leopard grouper and more. One very impressive Amalco jack of 90-pounds was weighed in. Along the shore, there were more jack crevalle than roosterfish, though more roosterfish are showing up now. The few sierra that are still hanging around are big monsters, for the most part, with a few pushing the 13-to-15-pound mark … Eric Brictson, Gordo Banks Pangas

Sea temp has been 86 degrees, which is very warm water for June. It has been clear and flat, with clear skies, cool mornings, midday highs in the 80s, with cooling afternoon breezes.

The dorado are finally showing in good numbers, with some big bulls arriving daily. Big 50-pounder roosterfish are abundant along all beaches. There is plenty of bait available.

Multiple pods of porpoise are holding yellowfin tuna from 5-to-40-miles offshore. There are enough tuna limits for all anglers. There are even footballs to 60-pounds and they are very aggressive biters! This is our seventh straight week of wide-open tuna fishing!

The striped marlin are mixed with a few sails. It is unbelievable how many there are close to shore, from 3-to-6-miles. All anglers targeting marlin are releasing at least one, with most enjoying multiples. Slow-trolled ballyhoo is by far the best bait.

Although dorado fishing is not wide open, recently schooling dorado from 5-to-30-pounds are mixed in with some big bulls. Smaller bright tuna feathers and live sardina are taking the fish.

Big roosterfish are found along all the beaches. Schools of 20-to-30-fish all over 50-pounds are cruising inside. Although they are a little picky on the bite, large sardina and caballito are working best. Quite a few are released on the flies … Rancho Leonero

The quality of the fish caught has been extraordinary. Maybe our anglers haven’t caught as many fish, but the fish they have caught have been bigger.

Roosterfish have been as small as 15-to-20-pounds, but in many cases, if larger bait was used the roosters were from 70-to-90-pounders. Almost all fish were released.

Not as many dorado have been biting; however, the size and quality of the fish we hooked were some of the largest seen in decades. We had fish that were well over the 40–to-45-pound mark with some even larger fish lost. A few of the bulls had heads that were easily 12-to-18-inches across and they put up spectacular fights.

The tuna showed up under the porpoise school’s way on the outside. Football-sized fish of 10-to-15-pounds were running with the schools outside of Cerralvo Island, but on several days, our anglers fished them until they ran out 0f bait and the fish were still foaming and wanting more! This is the first time we have had tuna in almost three years. Perhaps it has something to do with the appearance of the 6” squid we’re finding in the waters – also in the bellies of the tuna.

The most remarkable event lately has been the marlin that finally decided to bite.

Again, I think the great fishing this year had to do with the fact that the Covid protocols kept all activities off the water this year so the fish had time to grow. The bait was unmolested and there was almost zero traffic on the water.

So, for the first time in many years, we have had a wild billfish bite.

On several days, our pangas were hooking into one to five marlin or sailfish per day. Folks who were not interested in hooking a marlin told me they drove the boat away from spots of marlin and the marlin followed them.

Others, fishing lighter tackle for dorado or other species, suddenly found themselves on a long battle…some lasting well over an hour…with billfish. Several first-timers got the thrill of a lifetime, hooking billfish on long struggles. On some occasions, there were double and triple hook-ups on marlin or folks would be hooked on a smaller dorado or bonito only to have a huge marlin eat the hooked fish! Exciting stuff!

80% of all the billfish either broke off or were released.