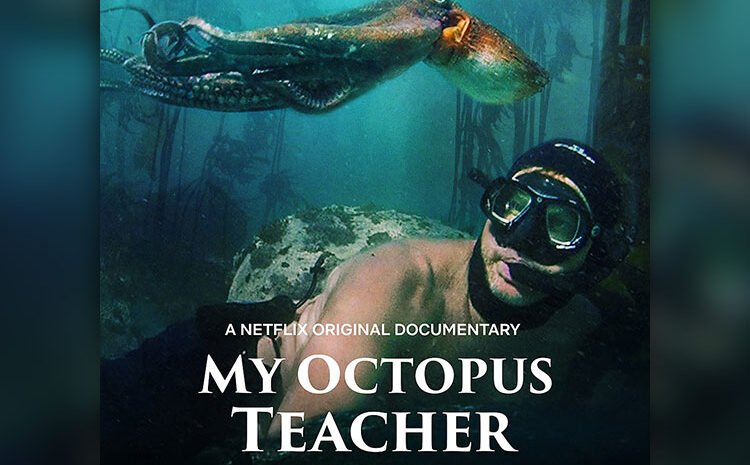 “The Really Long View” is the name I give to an approach in documentaries of the last couple of years that suggest a level of commitment and work that is truly elevating the art and science of feature-length documentary movies.

In this year’s Crip Camp, for example, the filmmakers use what appears to be home-movie footage of a summer camp experience for disabled teenagers that occurred in the 1960s. The movie is a classic study in applying patience, discipline, and long-range perspective to filmmaking.

In My Octopus Teacher, there is a similar commitment to patience, discipline, and involvement, but the time frame is shrunk to just short of a full year. And yet, to at least one of the two lead characters in this film – the octopus – that year represents most of her entire life. And, so, this film takes about as long a view as is possible in examining her story.

If that sounds a bit strange – talking about examining the life of a single octopus as if it were a central character in a feature film – well, that is exactly what separates this movie from nearly all the other wildlife documentaries that have come before it.

This film might be about a sea creature and the idea might conjure up an image of a National Geographic special on TV, with incredible colors, and spectacular images of another organism. But this film is really so much more personal than that. It is, in a very real sense, a biography of a particular octopus and the story of her mind-boggling relationship with a human being.

The human being is Craig Foster — a man who is no stranger to the exotic life of Africa having spent many months documenting the lives of bushmen of the Kalahari. After doing that, I sense that he was kind of lost and without purpose. Maybe having a ‘mid-life crisis,’ he was also having family troubles and decided he needed some substantial downtime. Living, literally, on the edge of the Cape of Storms in South Africa, he decided to spend time diving, without tanks, in the cold waters right in his backyard. After many weeks of getting used to the cold and learning to hold his breath, he encounters an octopus. Mind you, there is nothing particularly unique about this octopus, but he finds it and then, repeatedly, encounters it in his dives.

With an intense feeling of curiosity, he senses that there might be something to learn from this animal and, in a mix of commitment and, maybe desperation, he decides that he will visit this animal every single day just to see what this animal’s life is like. Initially, with nothing better to do, he actually succeeds in this “long view “effort for almost a year – diving into the kelp forest every day, finding his new-found friend, and just being with her for as long as he can hold his breath.

What he learns about the animal, and about himself, is nothing short of amazing. (In the course of his observations, many of them caught on film, he contributes many new behaviors to the scientific understanding of octopi.)

What distinguishes this documentary from the usual National Geographic special is that the story being told here is not that of a scientist or conservationist. We aren’t watching the animals behave from a distance while the narrator explains what is happening in a kind of scientific detachment. In the first place, this is the story of just a single animal – not a species, not a family. The octopus is a solitary animal struggling to survive, just like any other living creature. And by spending such a huge amount of time with this single animal, Craig Foster discovers things about her that would escape typical observation. The flashes of intelligence are shown when she hops on the back of a shark; the sensitivity when she strokes Craig’s hand with an arm; the pain and sorrow when she loses another one.

The implicit argument behind this kind of documentary is that a wild animal is so much more than the subject of scientific observation. We are conditioned to think that only humans experience true emotions. But Craig’s experience with the octopus suggests that our smug exceptionalism might well be the result of inattention and superficial observation. Taking Craig’s “long view” with the octopus leads to understanding well beyond the documented science project and gives nature a more rightful place in the hierarchy of not just intelligence, but also feeling.

And, towards the end, in a series of events that you really have to see to believe, the film brings the lesson back to the human side. Foster says, “What she taught me is to feel…that you’re part of this place, not a visitor. That’s a huge difference.” He made a commitment to the octopus and was rewarded with becoming a new member of the community. He then used that understanding to reconnect with his own son.

A question to ask yourself after watching this movie is “Why didn’t the octopus have a name?” There’s an answer to that, I think, and it comes from understanding the message behind the movie.

This is a terrific film using a technique to explore nature that I’ve never seen before. I also understand that I might not know everything there is to know about animals called an octopus. But I think I know how one felt about a human called Craig Foster. She doesn’t need a name for that. (4.5 Stars)