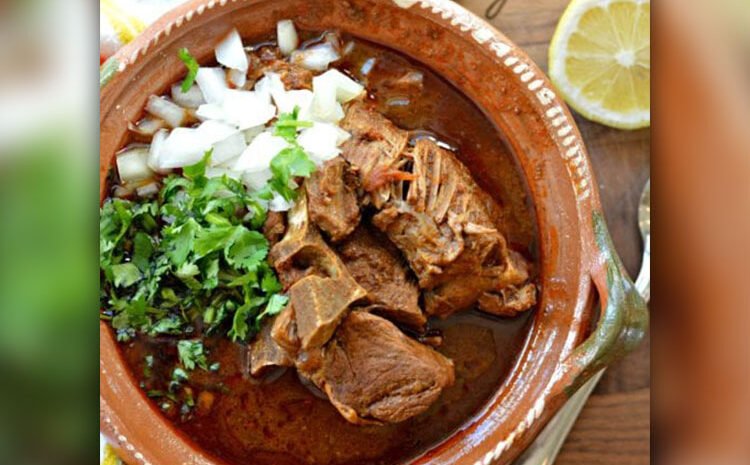 I believe stews are as old as time, and in Mexican cooking, we have quite a few that warm our hearts and bellies. Nothing is how it was and food has evolved. Before the Spanish came, cooking was quite different from what happens in a Mexican kitchen now. There were ceremonial stews like pozole, party stews like sopa de Piedra, funeral stews like (a type of) mole and so on. In most of the cultures I have had a chance of interacting with, there is a common dish – some type of stew or soup that is beautifully traditional and emblematic.

In Mexico, since there are more than 6 culinary regions, we can’t say there’s an absolute winner when it comes to a staple dish. Many dishes have a variation from one state to another, and birria is one of those tricky ones.

Thanks to social media, a lot of Mexican dishes have become famous. Birria is one of them. Full disclosure: I did not like birria up until a year ago and refused to eat it anywhere. There was just something about the smell that did not appeal to me, and there are very few things I will not eat.

Birria originates right at the center of the state of Jalisco, in the town of Cocula, located northwest of Lake Chapala, and southwest of Guadalajara. After the Spanish came, some newly introduced animals were well accepted by those who lived in Mexico at the time. Favorite among them were pigs, which soon became a staple, and were raised by many. But not all new farm animals had the same acceptance as pigs, chickens, and cattle. This was the case for goats, or as we call them here in Mexico, “chivos”. Goats became a real nuisance to the inhabitants of this land. They bred quickly and caused devastation to crops and land. Herds ate everything in their path, including the field crops and seedbeds of the indigenous peoples. Remember, back then, paddocks and fencing didn’t exist. Before the conquest, no large farm animal roamed these parts, and to a large extent, the increased goat population was an indirect cause of the famine suffered by so many native Mexicans.

During this time of famine, the locals began using goats for meat. And just like that, the first “birriero” (birria maker) was born.

Goat meat is very tough and has a strong “animal” taste, especially the meat of older goats. To counteract the strong taste and smell of the meat, they began adding different kinds of herbs and fragrant spices that contributed to the flavoring. In addition, by cooking it in the earth or in kilns, they helped soften the meat, making it so much tastier.

From the beginning, Cocula, Jalisco is considered the birthplace of the dish we now call “birria.” The tradition of the “birriero” families continues to this day, all with their unique recipe and style, which gives birria its distinct and delicious flavor.

The magic in this dish lies in its spices, and all of them are equally important for the perfect balance but I find chiles very fascinating. Chiles (Capsicum spp.) have been cultivated in Mexico for centuries and are a vital ingredient in Mexico’s traditional cuisine, recently recognized by UNESCO as an “Intangible Cultural Heritage of Humanity.” Spicy chiles also have numerous medicinal uses. Graphical representations of chiles have even been used as a national symbol. Evidence for chiles in the diet of indigenous groups in Puebla’s Tehuacán Valley dates back at least as far as 6500BC; by 4100BC, the plant was already domesticated.

One thing that blows my mind is how the same chile can be named differently if it’s fresh or dry. For example, jalapeños when dried become chipotles. I bet your mind is blown. And it happens with pretty much every single chile we have.

Birria has 4 different types of chiles and cannot be made with fresh chiles, but all chiles in birria can be tamed down by removing the veins and seeds for a milder kick. Birria is a spicy dish, but not picante. It’s not the same. Spicy as in spices and flavor, not picante as in sticking-your-tongue-out-sweating while eating. The dried chiles give it that special smokey taste.

Before we start, I’d like to give some tips.

— Birria is often eaten in tacos, not as a stew. If you want “caldo” (liquid) add an extra 6 cups of water to the sauce, starting with four and tasting how thick and rich you’d like it.

— Birria tatemada is when the shredded meat is “toasted” on a skillet with some lard or charred on a Comal.

Let’s get it started!

That’s it! Enjoy! Crack open a Corona. Let me know what you think. [email protected]