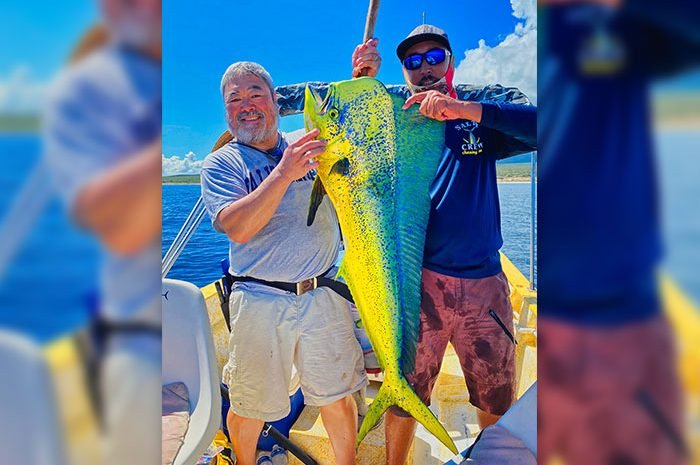 Paul Nagata has been coming down to La Paz one or two times a year for almost 20 years from the San Francisco Bay area to fish with the Tailhunter Fleet and he always does well. Check out this colorful dorado he caught while fishing with Captain Pancho.

BY GARY GRAHAM / THAT BAJA GUY

Recently, fishing has been closer to our typical summer season, with some inconsistencies. The water temperature has changed (with temps on the Sea of Cortez reported of up to 88 Degrees F) and the fish are moving quickly.

However, lately, the dorado picked up with almost 30 percent of the boats landing them, compared to only 5 percent last week. This helped pick up success rates and catches for anglers. Tuna numbers dropped slightly, but probably because the dorado showed up and were easier targets than heading out far for tuna. A few more billfish were taken as well, although not in large numbers.

However, blue marlin catches have steadily risen, with an outstanding catch and release of an approximate 600-pounder on Pisces 37-foot Reel Cast. That same day the guys also landed two yellowfin and lost another two blues! All in all, this weekend was one of our most impressively productive fishing days of the year so far. Just on Saturday for example, we had 81 fish caught (catch limits were respected with releases; all billfish were released).

The few anglers who were in town enjoyed mostly flat calm seas with a minimal breeze, except over the weekend, when passing storm clouds kicked up winds, creating choppy seas, but as clouds passed through, seas calmed down again; no rain was reported, though the higher mountain areas had some isolated rain squalls. Extended forecasts say that these calm tropical conditions will remain for the next ten days, and hopefully, they are right.

The main bait being offered are sardina and slabs of squid. This is what the better action has been founded on.

Yellowfin tuna has been the most common gamefish being targeted, and the tuna have been found from the Gordo Banks, north to Vinorama, with the Iman Bank being one of the more popular areas. Boats from the north, East Cape, are arriving on these same grounds, adding to the concentrated pressure.

The early bite was particularly good for yellowfin, which were in the 10- to 80-pound range with the average fish from 40-to-60-pounds. Although larger cow-sized tuna were seen, they proved to be finicky, quickly disappearing, though they are still in the area, and with these calm conditions, the ocean is becoming riper for wide-open action to break loose. Boats now were averaging one or two tuna, or sometimes up to five or six, depending on exactly where you happened to be.

Not as many dorado or wahoo are being found, though they are in the area and some were accounted for; most of the dorado were small fish and anglers have not reported seeing any large bulls recently. The few wahoo seen were in the 20-to-35-pound class. Minimal bottom action for mixed species – a few quality fish – Almaco jacks to 45 pounds and one 65-pound dogtooth snapper, barred pargo, bonito, pargo colorado, and one black sea bass by local commercial pangeros weighing about 70-pounds.

Last weekend, there were a handful of black marlin hooked into, most from the vicinity of the Gordo Banks, and while trolling skipjack or bolito bait. At least three blacks were landed and brought in. They ranged in sizes from 340 pounds to close to 500 pounds. Several sailfish and striped marlin also were reported.

Much improved fishing! A strong consistent tuna bite, big amberjack and pargo, some dorado, and the roosterfish have returned. Lots of good-sized, available sardine are helping the fishing. There’s not much fishing pressure on the billfish.

The very consistent fishing for big yellowfin has kept all Ranch anglers busy as they fill their ice chests heading North.

Quality yellowfin tuna are around ranging from 15-to-58-pounds. Most boats are taking at least four or five, and many are limiting close inshore off La Ribera, the lighthouse, Rincon, and the white cliffs off Vinaramas. All fish are taken within two miles of the beach, almost all on sardina. Boats going outside are catching smaller tuna under the porpoise. It’s great tuna fishing.

Quite a few Almaco jack were taken this week, from 20-to-50-pounds. Big dog-toothed pargo were taken to 35-pounds! Plus, there were plenty of pompano. All fishing the bottom with sardina.

The big roosterfish have returned! Very light fishing pressure, many cruising close to shore. Lots of billfish are around though they are very picky biters, and again, most anglers are going for the tuna.

It’s been a surprisingly good week for both fish and weather. Everyone who wanted fish caught fish! Whoever wanted to jump in the ocean or play on the beach, dive, or snorkel or dine at a La Paz restaurant was pretty much covered and went home with smiles!

Air temps were in the low 90s in the day and night temps were in the high 70s. Both unseasonably cooler than normal but it made life much more pleasant than normal with less humidity as well. We did have some afternoon thunderstorms pass through that were very tropical, but they blew through quickly and were generally after the fishermen were already back from being on the water.

The fishing was steady-to-good! Dorado was the main catch with fish scattered all over wherever the warmer water was located. It could be a pick day with a fish-or-two here and there and at the end of the day, anglers had a good box of fish. Or they could run into a nice school and it would be crazy pandemonium with fish slashing all over and take quick limits.

Surprisingly, roosterfish to about 50 or 60 pounds are still in the mix. Most are around Las Arenas and all fish were released. But normally, these fish are long gone. It could have something to do with the cooler temperatures.

Other species included the random (and rare) wahoo that must be hanging out with the tuna that still have not shown up. Plus, inshore species pargo, cabrilla, snapper, bonito, jack crevalle, cabrilla, and even “cold water” sierra.

Surprisingly, some of those species, like dorado, are in La Paz Bay a few hundred yards off the beach or within minutes of leaving the beach.