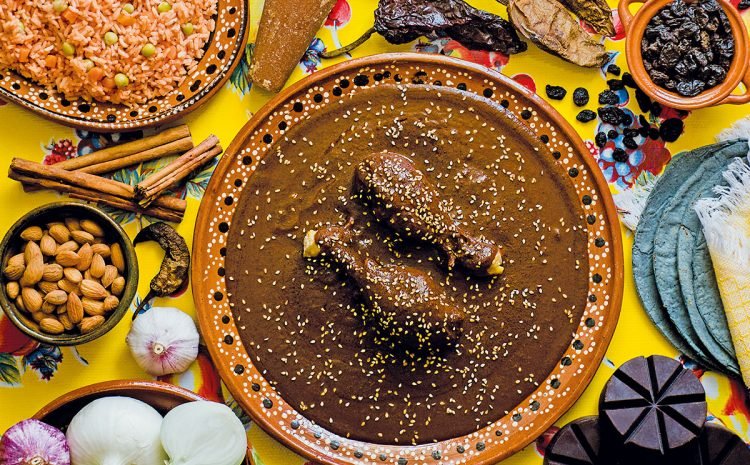 Mole is a recipe that I’ve been asked for a lot since I inherited this column from my mother. I was a little unsure as mole is a recipe that varies from one family to another, but I found and tried this one and decided I am brave enough to share it with you.

Yes, there are a LOT of ingredients and it might seem scary, but nothing out of this world. This will make a big batch, so keep that in mind, but it freezes very well and it’s also nice to share with your friends and neighbors while bragging you are a serious Mexican cook.

Two states in Mexico claim to be the origin of mole: Puebla and Oaxaca. The best-known moles are native to these two states, but other regions in Mexico also make various types of mole sauces.

Mole (pronounced moe-leh from Nahuatl mōlli, “sauce”) comes in various flavors and ingredients, with chili peppers as the common ingredient. The classic mole version is the variety called mole poblano, which is a dark red or brown sauce served over meat. The dish has become a culinary symbol of Mexico’s mestizaje, or mixed indigenous and European heritage, both for the types of ingredients it contains and because of the legends surrounding its origin.

A common legend of its creation takes place at the Convent of Santa Clara in Puebla early in the colonial period. Upon hearing that the archbishop was going to visit, the convent nuns panicked because they were poor and had almost nothing to prepare. The nuns prayed and brought together the little bits of what they did have including chili peppers, spices, day-old bread, nuts, and a little chocolate. They killed an old turkey, cooked it and put the sauce on top. The archbishop loved it. When one of the nuns was asked the name of the dish, she replied, “I made a mole.” Mole is an archaic word for mix. Now this word mostly refers to the dish and is rarely used to signify other kinds of mixes in Spanish.

Before I go on, I would like to talk about Bernardino de Sahagún. He was a Franciscan friar, missionary priest and pioneering ethnographer who participated in the Catholic evangelization of colonial New Spain (now Mexico). Born in Sahagún, Spain in 1499, he journeyed to New Spain in 1529. He learned Nahuatl and spent more than 50 years in the study of Aztec beliefs, culture and history. Though he was primarily devoted to his missionary task, his extraordinary work documenting indigenous worldview and culture has earned him the title as “the first anthropologist”. He also contributed to the description of the Aztec language Nahuatl. He translated the Psalms, the Gospels, and a catechism into Nahuatl. He was well-loved and respected by our ancestors because he was respectful of our culture, language, and food and portrayed it beautifully.

While chili pepper sauces existed in pre-Hispanic Mexico, the complicated moles of today did not. They did not contain chocolate, which was ingested as a bitter beverage, and in all of the writings of Sahagún, there is no mention at all of it being used to flavor food. Most likely what occurred was a gradual modification of the original molli sauce, adding more and different ingredients depending on the location. This diversified the resulting sauces into various types. Ingredients that have been added into moles include nuts (such as almonds, peanuts, or pine nuts), seeds (such as sesame seeds, pumpkin seeds, or squash seeds), cilantro, seedless grapes, plantains, garlic, onions, cinnamon, and chocolate. However, most versions do not contain cinnamon. What remained the same was the use of chili peppers, especially ancho, pasilla, mulato and chipotle, and the consistency of the sauce. The true story of how mole developed may never be truly known, as the first recipes did not appear until after the Mexican War of Independence in 1810. The Nahuatl etymology of the name probably indicates a Mesoamerican origin.

½ cup of pork lard (can use vegetable lard or oil, but pork is way better and can take more heat)

2 rounds of table chocolate (traditional Mexican chocolate, the grandma one is the most typical but you can choose whichever you like)

In a Comal or a shallow skillet with no fats or oils, over high heat roast the cinnamon, almonds, peanuts, nuts, pumpkin seeds, sesame seeds, cloves, pepper, cumin, star anis, garlic cloves, and white onions. Once nice and toasted but never burnt, reserve for later.

In a small pot over medium heat and a little lard, fry the chiles, bolillo, tortillas and plantain without burning them. Set aside as well.

Add some more lard and fry the previously grilled onion and garlic. Add the tomato and raisins until soft and cooked.

Add the grilled ingredients from step one and cook for 5 to 10 minutes.

Once you have everything a little fried with lard, add chicken broth until covered. Also, add oregano and thyme and season with salt and let it simmer for 20 minutes.

Let it cool a little and start blending little by little until you have a paste. You can add a little liquid to help your blender, one spoonful at a time.

Once more, add lard to a pot and fry the paste. Once fried, add chicken broth until you reach a mole consistency — not too thick, but not runny either, sort of like the thickness of gravy. Cook for 30 minutes.

Add the chopped chocolate and the sugar. This is a step that will depend on you tasting your mole to see how sweet you like it. (I personally would cut sugar and chocolate quantities by half, but I am following the recipe for you.) Let it simmer for 30 more minutes so the flavors all blend together.

The fat will start to separate by now, and you CAN skim it, but I don’t.

Dress your chicken with mole, sprinkle some sesame seeds on top, and enjoy!

I am sure you will have questions or comments, so reach me at [email protected] ! Happy cooking!