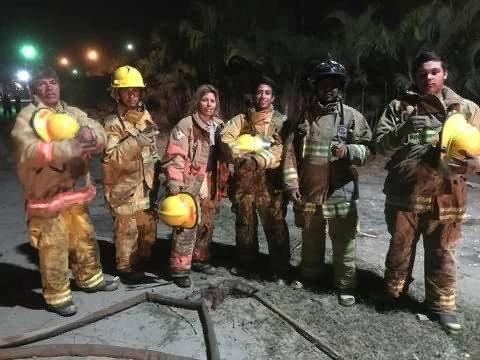 Now she saves lives herself

While safety has always been of utmost concern for first responders, during this pandemic rushing to the scene of any incident comes with a more cautionary approach to ensure no one’s health is compromised.

Griselda Sotelo, commander of the Volunteer Fire Department of Pescadero, is responsible for the 16 firefighters who work for her. Neither she nor any of the bomberos are paid. Because of the deadly virus, their lives are even more at risk each time they respond to a call.

“Things have changed a lot because it is more difficult to help because you always have to be aware of having adequate protection and the utmost care to keep yourself safe, taking care of yourself and others,” Sotelo said of what it’s been like since March.

Being a volunteer agency, as many are in Mexico, it can be difficult to get the necessary equipment to do their job in normal times. The government doesn’t offer much in the way of help. And these are anything but normal times. Pro Paramedicos has stepped in to be a conduit between financial donors who are mostly expats and nine area paramedic teams.

“One of the greatest challenges is keeping PPE available because the prices continually rise and local scarcity of different items interrupts the supply chain,” Ahuja said. “Our greatest accomplishment to date is that not a single one of the 120 plus paramedics we equip with PPE has become COVID positive.”

Pro Paramedicos is a group of volunteers without any paid staff. It has expanded its reach by providing PPE to the three hospitals in La Paz with COVID wards, and to eight community health centers. More than 500,000 pesos ($22,000-plus U.S.) worth of PPEs had been distributed in six months.

While COVID is always a concern, car accidents remain the number 1 call for the Pescadero firefighters.

The 51-year-old Sotelo is well known in this Baja California Sur community. In 2007, she became Mexico’s first commander of a fire department. Today there are only two women with this title in Mexico.

Sotelo’s route to this job was a bit circuitous. “When I was a child and was rescued by a firefighter, from there it was always my dream,” she said.

Her family was living in La Paz when Hurricane Liza struck in the fall of 1976. To date, this is the deadliest hurricane to blow through the state. When a dam broke it flooded Sotelo’s neighborhood. She was with her parents and three siblings when their vehicle started to float away in the rising floodwaters. That’s when they were rescued and that’s when the then 7-year-old knew what she wanted to be when she grew up.

Sotelo’s childhood was not easy. Living in a cardboard contraption never is. Despite financial struggles, she was a giver when it came to animals. This trait continues as she works to save the local turtles. She started helping turtles in 2004 at a time when people were still routinely eating turtle eggs. Once Sotelo learned about these wild animals she started educating others. She calls it a passion and that “it is the food of my soul.”

Even though she took her initial first aid course at age 18, her life went in a different direction when she got married at 22. It was in 2001 that she moved to Pescadero where her mom was living. Sotelo was 33, divorced and had three kids.

What she likes to tell people is “it is never too late to pursue your dreams because nothing is unattainable. Seek your mission in life and take advantage of your talents with dedication and effort. There will always be a reward.”

She with others started Patrol 64 Preservation and Rescue in 2007 at her home. The 64 is in reference to the kilometer marker off the highway. It is now known as Bomberos Voluntarios de Pescadero. “We realized the high rate of car accidents in our community. For this reason, we decided to enter our training as firefighters by vehicular extraction.” This was after going to the fire academy in La Paz.

There is no normal day for her or her charges. “It depends on the day; there are days in which you have to work from dawn until you go to sleep and others in which it is a very quiet day,” Sotelo said.

Three of her four children, who range in age from 22 to 29, have followed in her footsteps in becoming firefighter/paramedics.

While the donations from Pro Paramedicos are a literal lifesaver, the volunteer crew in Pescadero needs so much more.

“We currently have an ambulance and a small fire truck operating. When we started we only had an ambulance and a team eager to learn and help,” Sotelo said. She would like the command center to be some place other than her home, a fire truck in better condition, rescue equipment and a basket, another ambulance, and more training for the volunteers.

How to help: Donate via PayPal to Pro Paramedicos: https://www.paypal.me/xchelapp.