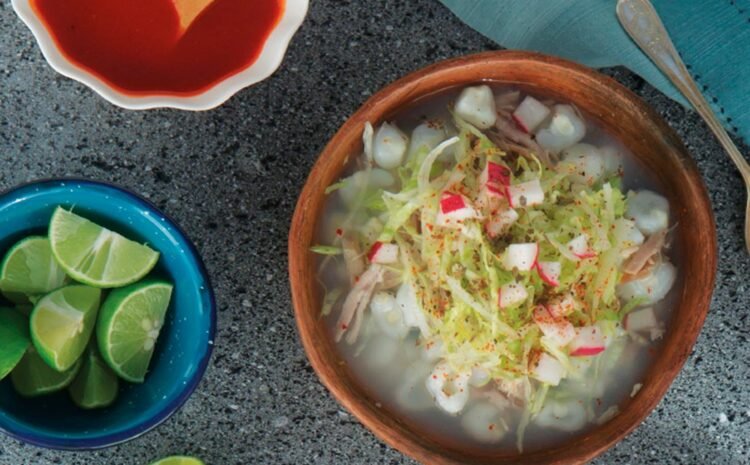 Pozole is by far the perfect and probably most recognized Mexican dish. At least it is my personal favorite and one of the most “complete” dishes you can eat. It is also cheap to make and can be made in batches to feed an army. It is made from the coast to the highlands in our country, and it has many variations too. Red, white and green are the typical colors it’s made in and they all vary in taste, seasoning and ingredients. Many families in Mexico make pozole for Christmas Eve, and I think it’s a simple enough dish for gringos to try, too.

One of the first questions I get asked when people learn I write a Mexican food column for gringos in an all-English paper is: Was pozole really made with human flesh? The answer is yes, yes it was. Moctezuma was the Mexican ruler in 1502, after his uncle. That made him the ninth ruler of the Aztecs. He is famous mostly because it was during his rule that the Spaniard Hernan Cortes came to Mexico. Cortes’ arrival led to Moctezuma’s death in 1520, and the end of the Aztec empire a year later. Historians have two main points of view as far as the Spanish conquest goes. Some say the Aztecs already knew a “white-bearded deity” was coming, called Quetzalcoatl. They knew because a priest had had a vision, while hallucinating during a typical ceremony. These ceremonies were regular and the hallucination was part of it, too. They used toads, mushrooms and plants to elevate themselves to be able to talk to the Gods. Another side of the story is that the Spanish arrived and made up a legend that was translated to the Aztecs and spread like their own.

The Aztecs were feared and hated by the subject tribes around the territory, and when Cortez came knocking on the palace, Moctezuma welcomed him and tried to buy him off. Once Cortez and his people were welcomed into the city, they realized it was a trap set up by Moctezuma and tried to escape but failed. Instead, they took Moctezuma and his family hostage in their very own castle. The Aztec people thought Moctezuma had submitted to Cortez and were furious and disappointed, so when he showed his face and tried to talk to his people, they stoned and arrowed him. This caused his death three days later. Moctezuma did not want his people to know they had killed him, so he asked the people in the palace to spread the word that if he died, it would have been Cortez’ fault. Once the Aztecs heard the fake news, they became even angrier. One night, when Cortez and his people tried to sneak out of Tenochtitlan, the Aztecs attacked them and nearly destroyed their whole force. There’s a pretty good series on Amazon called Cortés, and I think it is pretty accurate historically.

Before all of that shit storm, though, Moctezuma had banqueted every day. This was recorded by the Spanish before everything went south. The main meal was prepared early in the mornings and brought to him by servants. There were more than 300 plates with 30 different dishes served. He ate with his royal court and everyone was given a plate, including his servants. The dishes were kept warm in clay pots with hot coals underneath and washing was very important since there was no cutlery; everyone ate with their hands but they did have textile napkins. Moctezuma ate with four of his advisors and he decided what to share with them. The advisors would eat standing while Moctezuma was sitting and no one was allowed to watch him eat. The dishes and plates were laid on natural cotton tablecloths which were removed along with the dishes and plates when the feast was over. Six servant women were in charge of delivering the food and two were there exclusively to hand out the warm tortillas. While Moctezuma and his guests ate, there was no talking or noises allowed, unless Moctezuma spoke first or asked a question. Fruit, vegetables and drinks were all laid on the tablecloths, too. Even if the emperor did not feel like eating or drinking, they were symbols of respect. After the savory dishes were enjoyed, another set of servants would lay desserts, marking the near end of the banquet.

During the spring, the god “Xipe Totéc” was honored. He was the skinned god. Legend says that he removed his own skin to feed the Mexicas, and this made the corn grow. Thus, he gave his people livelihood for the rest of their existence. Due to the nature of his sacrifice, flesh sacrifices were offered to him, like pozole. The word Pozole comes from Nahuatl. It translates to foam. Pozole was given that name because while cooking the corn (a special kind of corn called cacahuiztle, which is big and plump and has a very hard outer layer of skin) it will blossom and look like sea foam. To ask for a good corn harvest, a pozole was prepared and Moctezuma would get a big plate with the thigh of a sacrificed prisoner on top. It was also rumored that Moctezuma really looked forward to said ceremony. He enjoyed human flesh quite a bit.

In another bit of history, it is said that the Spanish were offered pozole once and enjoyed it so much, one of them wanted to know the recipe. Once he looked into the huge pot, he noticed human remains and became so furious he drew his sword and split the pot in two. With all the hassle, the Aztecs were confused and the Spanish disgusted and with the help of a translator, they forbid eating human remains ever again. Of course, the people in the palace were not happy about that, but they were already being held hostage and had to obey.

Nowadays pozole is not made with human remains, thank goodness, but with chicken, pork, or beef (sometimes seafood too!). There are two main differences in the liquid: white or seasoned (green or red). All types of pozole have corn (cacahuiztle), broth, and some kind of protein. Some vegan pozoles have started to make an appearance in traditional kitchens, too.

Now for the recipe. I highly recommend starting to make this early, and it’s sort of a one-pot dish so it’s perfect for lazy days. This time I will influence you with my personal taste, and my favorite pozole is white with pork. Once you get this down, it’s a short road to any other variation.

Oh, and I also forgot to mention: this is a super healthy dish. Depending on how you prepare it, if you skim the pork fat, it is actually recommended by the Mexican health institution! Bone broth is now very popular among health junkies, but we made it first.

2 pounds of cooked pozole corn (maiz pozolero. You can find it in supermarkets and it is a four-hour shortcut that everyone takes nowadays)

2 pounds of pork meat (to your liking. I like lean meat on my pozole but flavor in the broth)

In a deep pot, add the water, corn, herb bouquet and garlic head (peeled and smashed)

Let it boil for 30 minutes, or until the corn has blossomed and it’s cooked. When you can pinch it between your fingers and it is soft, but not mushy, it’s cooked.

Season with salt and add the meat and cook until tender over low heat for about an hour. It’s very important that you do not add salt before this step, or the corn won’t pop properly.

Once the meat is cooked, remove from the pozole and let it cool enough to shred.

Shred the meat and set aside.

Serve the pozole. First a big ladle of corn with no broth, then cover the corn with the broth and top with shredded meat.

Powdered chile piquin to taste (piquin is VERY spicy) You can substitute with any dried chile you like, powdered.

Serve all the toppings in dishes at the table, so that everyone can assemble their own pozole, and enjoy!! A good pozole has a bunch of lettuce on top, often paired with a joke along the line of “some pozole found it’s way into my salad!”

Find me at [email protected] I am always grateful for mail, pics and questions! ,