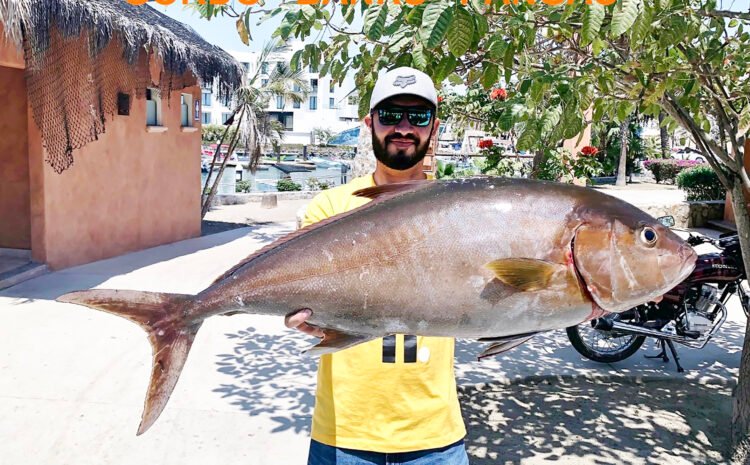 Brian Brictson who is now living in Redding, CA, is originally from San Jose del Cabo. Brian landed this awesome Almaco jack on a recent visit with his family.

BY GARY GRAHAM / THAT BAJA GUY

Windy weather hasn’t discouraged the stripers that are still biting. For those visitors on many boats willing to brave the elements, multiple releases are not uncommon. Adding to the excitement, the swordfish bite that began over a month ago continues.

The yellowfin tuna seem to be playing hide and seek most of the time. Maybe it is the lack of porpoise schools that are found either inshore or offshore.

The good news? There seems to be more dorado showing up in the counts including some good-sized fish in the 20-pound class. That, along with an occasional wahoo showing up in the lures, indicates that summer is just around the corner.

Inshore, the sierra remains a favorite, enhanced by the early roosterfish arrival which has been a crowd-pleaser for both the inshore crowd as well as for those choosing to pursue them from the beach.

Down deeper on some pinnacles close to shore, pargo, snapper, grouper, and a few yellowtail are often found, plus often targeted, but seldom caught, Almaco jack.

WEATHER CONDITIONS: Temperatures have remained in the 64- to the 79-degree range with overall calm seas, and sunny skies with afternoon breezes up to 17-knots.

This month started with us seeing larger numbers of tourists and visiting anglers arriving, a little flurry during spring break. Now mid-month we are seeing limited numbers of anglers showing up, even though we have had more interest with people asking about reservations for the coming fall season. It looks as though this will be a slow spring and summer season for local fishing businesses. As COVID-19 vaccines are becoming more readily available, even to locals, people seem to continue to be more hesitant to travel internationally. The weather recently has been very pleasant— an ideal climate with light scattered early morning marine layer cloud cover, lighter winds, and high temperatures around 85 degrees. It is a great time to visit, with lighter crowds and an excellent climate.

Ocean conditions have been slow to transition this season, but the water temperature is now in the 72-to-73-degree range and cleaner water is slowly pushing back closer to shore. In the meantime, anglers have found the most productive fishing action to be off the bottom rock structure and along the shoreline. The most common species has been the Mexican bonito, which has been the case for the past month now, with occasional yellowtail, amberjack, grouper, or red snapper mixed in.

The main bait source has continued to be caballito, with no sardina to speak of except the softer, clear type that is only used as dead bait. We did see one or two tuna caught off the same areas where anglers were bottom fishing. As temperatures improve, with warmer and cleaner water, we do anticipate surface activity to break open in the coming weeks

Along the shoreline, the main action has been for sierra and jack crevalle, and as the water warms up, we should see more roosterfish move in. Normal patterns usually see the end of April as a major turning point for water conditions becoming more attractive to the popular gamefish, and we are anxious to see this happen.

We are also optimistic that once anglers see that fish reports are greatly improved, they will decide to visit. …Eric Brictson, Gordo Banks Pangas

An improved week of fishing. The warming water has brought the yellowfin and dorado back; the striped marlin are thick with anglers targeting billfish, and releasing multiple fish. The yellowtail are still biting with some good-sized fish being taken daily. There are lots of good-sized sardina available and is by far the bait of choice. With the tuna and dorado showing, the fishing has lit up!

The yellowfin tuna are biting! The Lighthouse and Rincon are producing nice fish from 10- to 40-pounds. Drift fishing with live sardina is working best, with some fish taken on trolled Hoochies.

The dorado are being taken, mixed with the yellowfin. No real size yet, they are from 5-to-15-pounds with most taken on sardina, Hoochies are working as well.

Striped marlin are wide open! Jumpers and tailers are everywhere throughout the bay, and the drop-offs in front of La Ribera are producing. All anglers targeting billfish are releasing multiple fish. They are hitting everything! Trolled brighter-colored lures are working.

Yellowtail at the lighthouse and high spots close to the hotel are producing nice fish from 10 to 15 pounds. Cerralvo Island is by far the best spot. Live sardina are taking most of the fish with some taken on iron.

Roosterfish are back and 20- to 30-pounders are being released daily. Not much pressure as most anglers are fishing outside…Rancho Leonero

The mornings were cool and jackets were recommended, but honestly, we could not have had better weather recently. By the time the sun came up, it broke into clear blue days that weren’t too hot and waters were mostly flat calm. They were the kind of days to spend on the beach and the Chamber of Commerce loves to tout.

Gotta’ be honest, but everyone had to work hard for the few fish that were taken. That includes both our Las Arenas and our La Paz Fleet.

Sure, there were occasional flurries, or some boat would get lucky and everyone around them would be getting blanked, but for the most part, it was less than stellar fishing; we picked through pargo, cabrilla, snapper, bonito, and even some sierra. Some boats even struggled to catch a few bonito.

Yellowtail bit again, maybe not as crazy as previous weeks, but much better than earlier. We got our first roosterfish of the season. Dog-tooth snapper and pargo liso bit. In addition to some hefty pargo, bonito, and cabrilla, we got pompano, huge jack crevalle, and some mega-sized sierra for quite a variety. Saving the trips for several anglers who had been having a tough time … Jonathan Roldan, Tailhunter International.