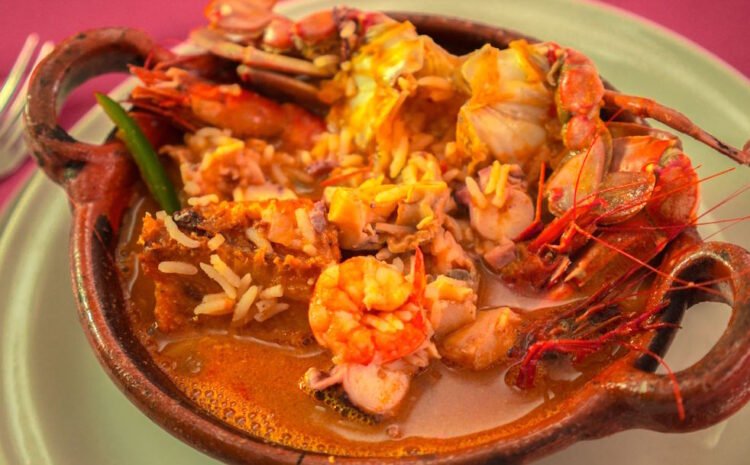 This typical dish from the coast of Veracruz, on the Gulf of Mexico, the southeastern region, is kind of between a paella, a risotto and a rice stew. This hearty meal has seafood and fish, and the original recipe has quite an interesting story among “jarochos” (that’s what people from Veracruz are called).

At the beginning of the century, the fishermen would travel the Veracruz Riviera looking for fish, crab and shellfish. Once they found a spot and anchored to the bottom of the ocean, they would wait for the fish to come around. The story says this particular crew found a sweet spot around the Blanco River, which is around the Alvarado settlement. They would use a combination of nets and knives to get the products they needed. The boats also had combustion motors, so they also had a chance to fish along further coasts.

These further excursions were called “de Nevada,” which roughly translates to “snowy,” because they could sometimes find ice while exploring the waters. This helped them preserve their catch and they could go on longer fishing trips without the risk of the catch going bad.

Now, as many of you may know there are different jobs in a fishing crew: a captain, a second captain, and a person who would be in charge of waking everybody up in the middle of the night to begin catching. The owner of the boat would include a basic food pack for the crew to survive on. This would include coffee, sugar, salt, rice, tobacco and crackers and a jug of 96-degree alcohol. All I could find in English was ethanol but, please, do not take my word and go drinking it. Remember this is olden times. (A long time ago, Mexican pharmacies would sell red and blue cap alcohol and one of those was safe to drink. They don’t sell it anymore and I can’t remember which one it was.) Anyway, part of the reason for the owner to send booze was that it kept the crew warm when they mixed it with whatever fruit they could find.

After the first catch, the second captain would rotate the jobs around the crew, and the member in charge of the food would take the bare minimum to feed the rest of the crew. The cook also had to find the timber to make a fire around the river. The cooking utensils were limited. The only “pot” they had was a 4-gallon can where pork lard was stored. The locals’ shops around the town would give these to the fishermen. The story goes that the member picked for cooking was chatty and clever and could always make a joke out of anything.

Everything was well and fine while he selected the seafood and started to prepare the feast to be ready when his mates came from the early catch. Our star cook got the fire started and once it was going, he placed the empty can on top. The can was not totally empty. It had lard remains, which started sizzling without him giving it much thought. He threw in the rice and it started frying.

The cook realized he’d need “something” to stir the rice and cut a branch from a nearby tree. Before stirring, he threw the seafood in with the rice. He knew the rice and seafood weren’t going to be much so he poured water without measuring just so the food didn’t burn. He topped off the can with water and left it to cook over the fire while he sat nearby. This cook realized the contents of the can were starting to boil and were threatening to boil over. At this point, the star of our story quickly grabbed his stick and tasted it. He realized he did not season his creation with salt, and he threw in a handful. He went back to his seated position, called “tumbao” in Spanish, hence the name. After it boiled again, he started wondering if maybe he had put too much salt in, and when he tasted it he realized it tasted like the ocean – too salty. He then poured in some more water in hopes to un-salt the meal before his mates came around. Right after he did this, he heard the crew coming and realized he hadn’t made the alcoholic beverage for them. He decided to leave the rice and started mixing the drink.

Moments later, his mates, cold, wet and hungry came growling and swearing at him because he had nothing ready for them yet except for their alcoholic drink. They settled for the drink to warm them up but it got their appetite going, and they asked, “Hey, where’s the food?” The cook cleverly replied, “Right there.” Sitting “tumbao” in the can, the crew saw a stewy mushy whatever in the can and got angry when they couldn’t figure out what it was. He explained it was “arroz a la tumbada” pulling the name out of his sleeve and making a reference to the sitting position he was in when they arrived. They were used to regular “dry” rice but their hunger made them settle for that strange meal. The cook was expecting a bunch of angry reactions to what he so carelessly made, but the fishermen were quite pleased. Much like many other Mexican recipes, this was also an accident.

16 shrimp peeled and deveined with tail on

4 blue crab cleaned and cut in half

Sea salt to taste (about 2 tablespoons)

Place the pan on medium heat and add the olive oil. Place the rice and fry for 2 to 3 minutes until the grains are translucid on the outside and white on the inside. Don’t mix the rice. Gently fold the rice so it won’t break and turn mushy after cooking.

Add 4 cups of hot fish broth or water. Allow to come to a boil. Taste the broth and see if it needs more salt. It should taste a little salty since you will be adding seafood and vegetables. Put on low heat and cover for 10 minutes.

Add another 2 cups of hot fish broth. Carefully place the blue crab into the rice and cover for 5 minutes.  The broth should always be ¼ inch above the level of the rice. Add up to two cups of broth to do so. It is not necessary for the broth to cover the seafood. Taste the broth. It should be a little salty. Also, taste the rice as it should be almost cooked.

Add the rest of the seafood, carrots, and peas. Cover the pan for 5 minutes after the broth comes to a boil again. You may need to add more broth. Again, make sure the broth is ¼ inch above the rice.

Important: This is a soupy style of dish. It should have liquid as you serve the dish in a bowl. This is not like paella (only in presentation) which is much drier.

When the rice is cooked but still al dente, serve in a bowl and sprinkle with cilantro and serrano chile. Serve with lime wedges to squeeze over the dish. ,