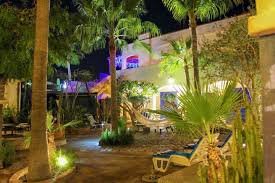 In a recent article, the New York Times described the Angel Azul (Blue Angel) boutique hotel as “a charming oasis in downtown La Paz – a historic relic in Baja California Sur.” The site was built in 1880 and was a Chinese retail store, a Justice palace and an art gallery. It was abandoned for years and owner Esther Amman, originally from Switzerland, acquired it in 1996 and remodeled it into a 12-room boutique hotel, keeping most of the original construction intact, but renewed. Its large indoor patio is an oasis decorated with endemic vegetation. Visit: https://theagencyloscabos.com/listings/el-angel-azul-centro-la-paz