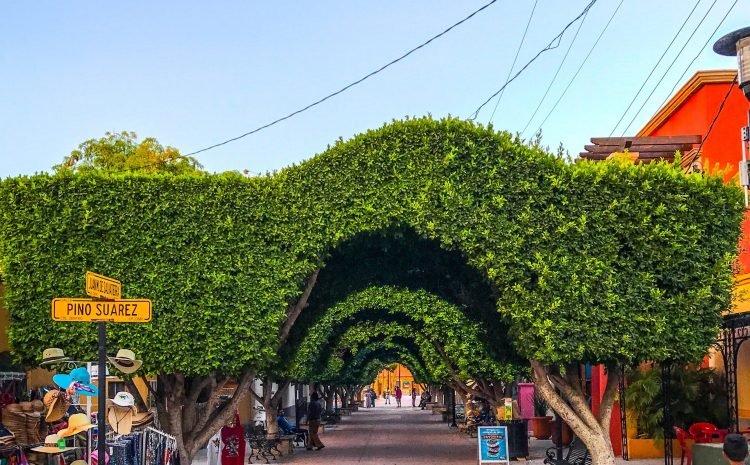 Let’s Donate Christmas Toys This Week! The Hablemos Mexicano (Let’s Speak Mexican) group in Todos Santos is holding a Christmas gift program. The collected gifts are for children of the migrant workers who live in the camp on the way to La Paz. There are approximately 700 children between the ages of 2-8 that are living there now. These are very poor families from the mainland and the group is hoping to donate around 1,000 gifts. The guidelines are pretty simple. Bring a wrapped (or unwrapped and they will wrap) toy or clothing with a tag that states the sex and age of the intended recipient. No battery-operated toys or electronics as these families cannot afford to replace batteries. There are already some paper handle bags with a gift or two inside wrapped in tissue paper as with a tag on the outside something like “Nina 2 años,” as well as beautifully wrapped presents. There is a little school at the camp, so crayons, coloring books, colored paper etc., are also good gift ideas. If you find in your heart to donate, drop by Hablando Mexicano, Ignacio Zaragoza 19, Downtown Todos Santos. Merry Christmas!

Artsy Event Returns to Cabo San Lucas. Every Friday, the “Viva la Plaza” art and restaurants walk takes place, starting at 6:00 pm. at the Amelia Wilkes Plaza, two blocks up from the main drag across from the Hotel Tesoro. Some streets are closed to vehicle traffic. The event features art exhibits from local artists, live music, wine tasting and more! Disinfectant gel will be provided at the entrance and your temperature taken. Please wear a mask and respect social distancing. Enjoy the party!

New Museum Opens in La Paz. Located in the heart of downtown La Paz, at the corner of Cinco de Mayo and Belisario Dominguez streets, across from the cathedral and the park, the Museo de Arte de Baja California Sur is open Tuesday to Sunday from 10 a.m. to 5 p.m. It will also open every Wednesday for its “Night at the Museum” more relaxed visit. It has three halls, one dedicated to Southern Baja artists, one to modern art and the third to contemporary art. Due to COVID-19, the maximum capacity will be limited to 25 people. Reservations are recommended, by calling phone 612-122-8980. There is a video on Twitter just type twitter.com/i/status/1336445456537190400 and enjoy from home if you can’t go in person.

It’s Christmas Time for the La Paz Cops! The La Paz Mayor has authorized the local cops to ask for a Christmas cash donation while at work in the streets of the city. This is a tradition, given that city cops don’t make much money. Their annual salary, depending on their rank, averages 10 grand a year. And you wondered why they take bribes the rest of the year? Now you know. The cops will be handing out a small printed note in Spanish, so you can pretend you don’t understand, or hand them a few dollars. Your call.

How Safe is Traveling to Mexico? ABC News interviewed Ashley Lewis, who has traveled to Mexico several times since March. “I felt safer there than I would at a Target or Market in L.A. The resorts are secluded, not sold to 100 percent and all the staff wears masks and abides by the rules.” Los Cabos has been certified by the World Travel & Tourism Council (WTTC) with the “Safe Travels” seal and the State’s government has instituted its own health and safety certification, Clean Point Quality Seal V2020. So come on down and enjoy our beautiful destination and warm weather!

Movie Theater on the Beach! The good news: The very first Drive-In movie theater showing will take place on Costa Azul beach on Saturday, December 19, sponsored by the Los Cabos city government and Cinema Vagabundo. The bad news: The announcement and invitation to reserve via email was announced on November 29 and today, the organizers have informed their Facebook followers that the showing is sold out. Bummer. To stay tuned, follow Facebook/CinemaVagabundo

UBER Grows and Grows. Despite the Los Cabos city government being against UBER and other similar apps, the private transportation app has grown in our state from 900 to 14,000 vehicles. Although the Mexican Supreme Court ruled that these apps are private agreements between individuals and cannot be regulated as public services, some cities in Mexico are still fighting them, under pressure from the powerful organized taxi owners and drivers. In Los Cabos, only the high-end hotels are off-limits to UBER but the rest of the city is open. And we love them.

San Jose Christmas Tree is Up and On! Mayor Armida Castro turned on the lights on the San Jose del Cabo Christmas Tree, located at its downtown main park. Castro made emphasis on getting everyone and their dog to wear a mask, and celebrated the beginning of the Holidays, asking everyone to spend the party time at home and staying healthy.

The Baja 1000 Off-Road Comes to Cabo. Yup, next year. Our state’s secretary of tourism met with Score International officials to negotiate that the Baja 1000 off-road race, which usually runs from Ensenada to La Paz, extends its course to Cabo San Lucas. This happens once in a while, as it costs our state a bundle of money to pay Score Int’l to bring it down here. Plus additional expenses, like preparing the rural roads to welcome the racers and then fix them again to calm down the angry ejido landowners along the road. Oh, and to pay them off for using their dirt roads, too.

Real Estate Development Grows. And this time we are not talking about Los Cabos, which can’t stop growing. This time we’re talking about La Paz, where real estate development grew at a fast pace of 25 percent despite the pandemic. New land and homeowners come from Mexico’s mainland, the U.S. and oh yes, Canucks. It is expected that the trend grows, even more, this winter, when the snowbirds fly down and Mexicans come to spend the Holidays.

In Related News. If you are a regular reader of this rag, you already know the average age of our visitors has come down from Baby Boomers to boys and girls in their late 30s to 40-somethings. If you haven’t read that, shame on you! The latest statistics are now telling us the type of tourists is also changing. In the recent pre-COVID-19 past, most of our visitors were couples or groups of male friends who came down to fish. The current trend is small to wealthy medium groups of friends and relatives, some of them landing on private aircraft and leasing expensive yachts to fish and party.

Nautical Parade Announced. Since the fireworks and large parties on popular Medano Beach in Cabo have been canceled due to the pandemic, people wondered if the now-traditional Nautical Christmas parade would take place. Yes, it will, and it will be streamed online. How is the organizer going to stop the hundreds of people that gather along the beach to watch it, nobody can tell.

New Underpass to be Built. This time, it will be for pedestrians. Neighbors of El Tezal, the mostly dirt roads barrio around Costco and the Ventanas development, are working with city urban planning officials to get an underpass built near Costco. That area is the site of constant car wrecks, people getting hit by speeding vehicles and even some cattle crossing the road. It seems the underpass will be built next year and will be maintained by a coalition of neighbors, nearby businesses and the city.

Mexico’s Minimum Wage Increase Debated. As is traditional every year, minimum wages go up on January 1. The debate has begun, with the President proposing a 15 percent increase, 9 points above the current inflation of 4 percent. The current minimum wage is 123.22 Pesos (about $6 USD a day) and higher ($9.20 USD a day) in the Northern border with the U.S. That would leave the minimum wage per day at $6.90 USD in the mainland and $10.58 USD in the northern border. The Coparmex (Employers’ Confederation) proposes between $6.3 and $6.7 USD. The first matches current inflation and the latter is a little higher. The Mexican Chamber of Commerce has not revealed their proposal. The National Commission of Minimum Wages (whose President’s last know salary was $286 USD a day) will make its decision public before the end of the year. If you are an employer in Mexico, the raise is mandatory for minimum wage employees but not for those whose salary is higher. That’s up to you to decide.

The Quaint Town of Loreto Gets a Bunch of New Flights. American Airlines just opened a swarm of new seasonal flights to Loreto, Mexico beginning in December 2020, making it easier and quicker than ever to jet off to the shores of one of Mexico’s most incredible beach destinations for the winter vacation of a lifetime. Starting on December 17 through May 3, you’ll find an increase in flights with connections to Loreto through the Dallas Fort-Worth and Phoenix airports. Four flights a week! Sunday, Monday, Thursday and Saturday. This is great news for the quaint, quiet town of Loreto. You gotta visit its Coronado Islands and a number of gorgeous beaches.