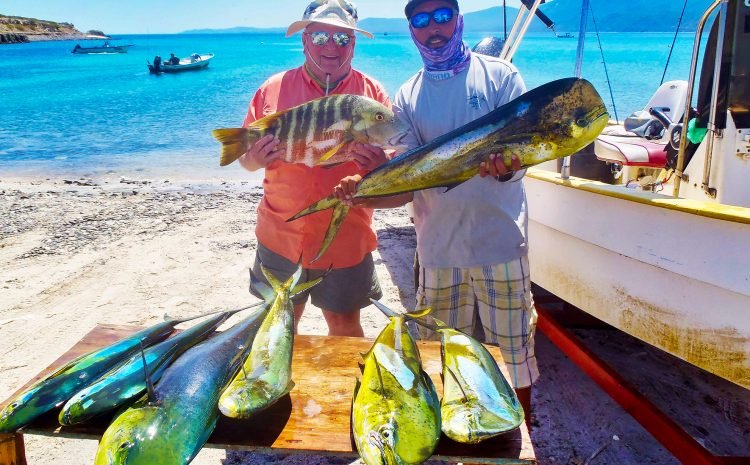 John Ehlers and his wife Dolores from the Denver area have been fishing with Tailhunter Sportfishing in La Paz for almost 20 years now and sometimes they come twice-a-year. Ehlers shows-off a days’ catch with Captain Pancho on the beach at Bahia Muertos including some nice dorado and a big barred pargo.

And don’t forget the day before that, it was seven yellowfin between 50 and 100 pounds for this crew, plus more dorado, too! All other boats have had fantastic fishing as well, with lots of dorado, tuna, and marlin.

And as if that wasn’t enough, Pisces 35’ Valerie had a Billfish Grand Slam: one blue marlin, one striped marlin, and one sailfish (plus a dorado)!

October is the time of year when the Los Cabos area typically begins to become busy with visiting anglers. This year has been a completely different story, as the “crowds of tourists and anglers” remain light and the situation looks like it will not change much throughout the rest of the year. The weather has remained very stable with no new threatening storms developing at this time, though with ocean temperatures still averaging 86 degrees or higher – you never know what could happen. Early mornings are just now starting to feel that slight fall chill, light offshore breeze; it’s the ideal time now, with anglers enjoying calm conditions almost every day.

Sardina are schooling near the marina entrance, although not many caballito are around, slabs of squid are being offered. Most fishing activity has now been concentrated from the Gordo Banks to Iman Bank. Iman and La Fortuna are producing the most consistent action.

The most common gamefish being targeted successfully was yellowfin tuna and wahoo. The tuna are ranging in sizes from 15 to 70 pounds; we did see one fish well over 100 pounds landed by a team of local anglers on an afternoon trip. The yellowfin were striking mainly on sardina, but a percentage were taken on strips of squid as well. The wahoo became more active recently on these same grounds, and most strikes for these speedsters were taken on trolled Rapalas, sizes ranged up to 40 pounds with some boats landing as many as five in a morning. Average tuna catches were a bit down this week, and the numbers varied from day to day, with one, two, or three fish per boat being the normal catch.

Very few dorado were seen and most of those that were caught were small. A handful of sailfish were hooked, as well as a few black marlin in the 200- to 300-pound class. Not much bottom action was happening, though on the same grounds where anglers were drift fishing for tuna, there were some nice-sized dogtooth snapper caught, up to 50-pounds, no big numbers, though it was nice to see a few of these fish; they have been scarce in recent years.

Water has been at 86 degrees. Clear flat in the mornings with afternoon southeasterly breezes.

Air has been very cool and pleasant for early October. Highs in the low 90s.

It’s been all about the tuna! Limits of yellowfin from 10- to 40-pounds for all anglers. Lots of billfish and roosterfish around with light fishing pressure along with a few smaller dorado and wahoo mixed in. The bottom fishing has been stellar, with lots of pargo, Almaco jack, and pompano for anglers going deep. All anglers are targeting the tuna and pretty much ignoring the billfish and roosters.

Nice-sized tuna were found close to shore from the lighthouse South. Rincon Bay has been producing limits of good-sized yellowfin from 10 to 40 pounds. All were taken on live sardina and chunk squid, mixed with lots of skipjack. A couple of skippies were taken for every yellowfin. Anglers are pulling on fish all day.

The occasional dorado and wahoo are getting taken mixed in with the tuna. All anglers are staying on the tuna piles.

As usual, there has been exceptionally good bottom fishing – nice Almaco jack to 50 pounds, lots of pargo, and pompano being taken on sardina, chunked squid, and skipjack.

Big roosterfish are cruising the beaches with light pressure. Lots around!

This past period presented another weird twist-and-turn in an already erratic and chaotic fishing season…and year.

All season, fishing has been up one week and down the next with no rhyme or reason. Fish that should be biting are scarce and the entire season has pretty much been taken up by dorado and roosterfish that should not even be around this late in the year. Frankly, anglers are grateful for both because both fish have kept rods bent and people smiling.

With some additional catches of bonito, jack crevalle, pargo, cabrilla, and snapper, that’s pretty much been the whole season.

Until this recently…with a full moon at that.

Fishing did not go wide-open. In all honesty, it is stretching it to say it was great fishing. However, numbers of fish have been replaced by quality.

Billfish started biting, striped marlin and big sailfish, that are unusually larger than normal – and anglers have caught more sails this season than the last several years combined. The sailfish are easily in the 100-pound class or larger.

More exciting are the wahoo that have been hanging around the south end of Cerralvo Island and near Bahia Muertos, although they are reluctant biters. They went on the chew the last few weeks with boats often hooking (and often losing) multiple fish as the speedsters with sharp teeth tore into trolled lures. However, the fish have been legit – 30- to 50-pound skinnies.

During this time, the dorado bite that has sustained us has dropped by 50%. Either it’s because the dorado just aren’t biting, or folks are spending more time chasing the home run fish like the billfish and wahoo.

Hopefully, we’ll finally see some tuna which are way overdue!