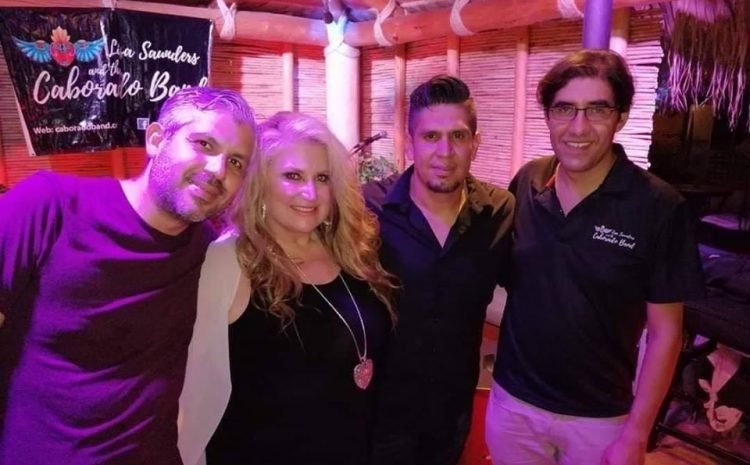 For those who are not familiar with Lisa, she has performed for many years, honing her craft internationally. Lisa has sung with top performers on the U.S. rock scene as well as fronting her own bands in popular resort areas in Colorado, USA and Los Cabos, Mexico.

She’s a great entertainer who will wow you with her varied musical tastes crossing over into rock, blues, jazz, Latin as well as contemporary pop. You must experience the pure joy of singing and dancing that she brings to each and every one of her shows.

Lisa Saunders has been drawn to music since childhood, singing and dancing anything on the fireplace hearth in her family home back in the ’70s.

At age 6 or so she began to play the piano. At age 16 she acquired an elaborate sound system that changed her life. She then set about learning scores of songs, belting out tunes over pre-recorded tracks as if she was a part of the band. Music was a passion for her. She trained with acclaimed voice coach Venita Burch and together they worked on perfecting her vocals.

Lisa worked in a succession of cities around the country before moving to the vibrant mountain town of Pagosa Springs, Colorado where she developed a large following. Her main project in Colorado was “Broke with Expensive Taste,” a jazz-fusion effort that she performed around southwest Colorado.

Lisa’s first CD “Infatuacion” in 2016 was a unique Latin-influenced project that featured musicians from Colorado and Cabo San Lucas collaborating on a mix of American and Mexican pop tunes. That album featured professional musicians from Pagosa, Durango and Cabo San Lucas, and thus the name ‘Caborado’ was coined by producer DC Duncan to reflect the backup musicians’ origins. Lisa had connected with numerous musicians while in Cabo, including three members of rock singer Sammy Hagar’s ‘Cabo Wabo’ house band: drummer Geovan Olachea, guitarist Gilberto Menoza and bassist Hector Lopez. They became part of the ‘Caborado’ band for her 2018 CD. This CD confirmed what fans and friends have known all along — Lisa Saunders was a world-class singer!

At the beginning of her live performance journey, a musician came to Pagosa Springs in 2007 named Brian Flynn, who Lisa said was some hot-shot crazy over the top guitar player. She was introduced to Brian and the next thing she knew she was invited to sing a song, and from there they put together a duo show for the area. Brian Flynn invited her to come to Cabo to sit in and sing on some of his gigs. Vick Mote, a good friend of hers from Colorado, who had already moved to Cabo, also encouraged her to come down to try a season in Cabo. The rest is history.

2017 was the first live performance line up of Caborado. With Mauricio Acuna on keys and Feliz Figueroa on guitar, they began playing at Cabo Blue. Also that year she did a little duo project with the incredible Francisco Dominguez (incredible guitarist from Rancheros Tristes). Geovan Olachia (former Cabo Wabo house drummer) had a side project called Pulsar that put on a few epic Pink Floyd Tribute shows throughout the Baja, and she was invited to sit in a few times at the Mango Deck Tribute. That is where she met the incredible Arturo Ramirez, who became her musical director and arranger.

The 2018 line up of Caborado was created along with Hugo Navarro on keys, Raul Herrera on drums and Zuri Franco on viola. In 2019 she added Ender Lee on guitar and moved Raul Herrera to horn and percussions and the fabulous Kitchu joined in on drums.

Upon returning to Cabo in October of 2019, the Caborado Band morphed once again.

Depending on the venue and their needs, the band versatility can deliver rock, blues, jazz, Latin as well as contemporary pop. She has had a great 2020 in Cabo and her friend Judy Skinner helped out.

When asked what direction she thought she was going in music, she said “As for my music, the bottom line is I simply just love to sing. It is my way to best express my emotions. It is hard for me to pick one music direction; I love so many different styles and rhythms. Sometimes my mood influences what and how I sing, but the reality, as musicians, we play for the people and try to play what they would like to hear but it helps me to deliver a song better when it is a song I can personally relate to.”

This songstress is finally doing exactly what she has always wanted to do – entertain people with her amazing voice and bubbly personality.

Lisa Saunders and her Caborado Band are based in Los Cabos, Baja California, Mexico. To see Lisa’s upcoming 2020 Los Cabos and USA music venues, keep your eyes on her Facebook.