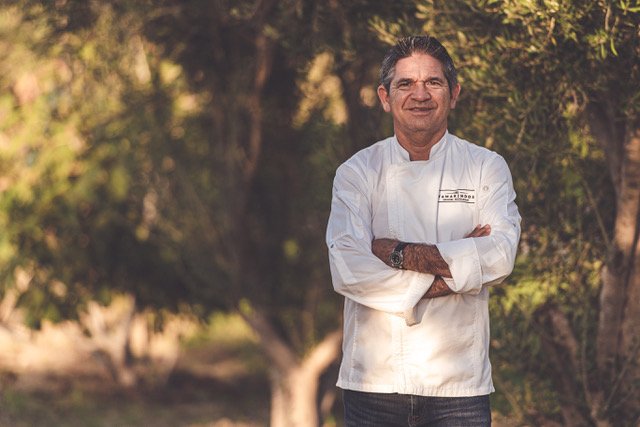 There’s an easiness to Tamarindos, a sense that the historic farmhouse and pristine, verdant fields below have always existed.

The effortlessness guests feel is the result of decades of hard work, manual labor, vision and purposefulness, all manifestations of an agricultural and gastronomical dream Executive Chef Enrique Silva harbored decades before he took command of a professional kitchen.

Raised in Navojoa, Sonora, in Northern Mexico, Silva’s journey to culinary excellence took root in his childhood kitchen. Silva’s late mother, Ramona, viewed cooking as an art form and a celebration of culture, as well as an obligation to feed her family of 10.

On a daily basis, Ramona’s young son helped her prepare traditional Mexican dishes. Silva absorbed the love and respect his mother had for fresh ingredients and observed how they married together to become more than just a sum of their parts.

Silva attended a prestigious Mexican university on a basketball scholarship and devoted his academic efforts to agriculture, a major industry in Sonora, learning about how water, soil and myriad factors affect the quality of the food we grow and eat.

Shortly after graduating in 1987 with a degree in agricultural engineering, Silva left mainland Mexico for San Jose del Cabo, then a town of around 3,000, where he sold premium cuts of beef to a burgeoning restaurant scene struggling to meet the high-brow expectations of a new class of wealthy visitors.

In 1990, he was hired as head waiter at the famed Hotel Palmilla, now One&Only Palmilla, under the guidance of master chef and mentor Larry Nicola who would prove to be a major influence on Silva throughout his career.

In 1994, Silva had an opportunity to expand his culinary and cultural horizons and relocated to Girdwood, Alaska, where he helped inaugurate the brand new, world-class Alyeska Prince Resort operated by Japan’s Seibu Corporation, and managed the opulent Prince Court restaurant.

As Silva’s experience and reputation grew, so did his clout.

In 1995 old friend and mentor Larry Nicola brought Silva to Los Angeles to manage his upscale American fusion restaurant, Nicola, located in the Sanwa Bank building’s avant-garde atrium in the heart of downtown.

But the allure of Cabo was a constant siren song for Silva, and when Fernando Hernandez, a fellow veteran of the food and beverage industry, suggested he move back to San Jose del Cabo to open a restaurant together, Silva was ready to take the leap.

Tourism in Cabo was booming and Silva wanted to take advantage of his travels and new experiences to open a fine-dining fusion of Mexican, Mediterranean and Asian cuisines using nothing but fresh ingredients, an utterly unique concept in San Jose at the time.

The place was a wreck, but they could see past the paper-strewn interior and a large patio choked with hurricane rubble to the potential the location offered: here they could construct an open, outdoor kitchen and offer garden dining under mango and plumeria trees. After much hard work – Hernandez and Silva cleaned and remodeled much of the property themselves – Tequila debuted in the spring of 1996 and remains open to this day.

At that time, Tequila was in a class all its own and a robust success, drawing loyal locals, ex-pats, affluent tourists and international celebrities such as Cindy Crawford, Robin Williams and Quentin Tarantino.

As Tequila grew in popularity, the fresh, organic produce Silva was determined to use at the restaurant became harder to come by. Ever resourceful, the intrepid Silva decided to put his college degree to use and in 2002 purchased farmland in Las Animas, a rural community just 10 minutes from downtown San Jose.

Tamarindos, named for the grove of tamarind trees that graces the property, provided fresh, organic produce for Tequila; the new crop of high-end restaurants and hotels in the area who embraced the organic wave that swept through the area eagerly bought up the farm’s surplus. That same year San Jose’s Organic Market opened, and Tamarindos was a founding vendor of herbs, uncommon and heirloom vegetables and house-made salsas.

But Tamarindos had more to offer than just farmland. Silva had his entrepreneurial eye on the property’s crumbling 19th Century farmhouse from the beginning and began painstakingly remodeling the historic home. The process took years. After reworking the interior, Silva added an earthen oven and wood-fired grill to the exterior and Tamarindos cooking school was born in 2010. The restaurant opened a year later.

Today, Tamarindos has grown exponentially in scope and acreage but retains a simple, vital authenticity.

Fish is purchased daily at the marina from local fishermen. Tamarindos raises its own Cornish hens and quail right on the farm.

The restaurant’s lamb barbacoa is sourced from a nearby farm, as is its pork shank. Pasta is handmade daily.

Fruits, vegetables and herbs are grown on-premises and are clearly visible in the fields below the restaurant, a testimony to Silva’s philosophy of freshness and quality above all else.

In late 2019 Silva also opened a new restaurant, La Venia, in Tulum, Mexico, with a focus on mescal and a diverse array of tacos.

A hands-on chef from start to finish, Silva nurtures his crops from seedlings to maturity, selects them at the peak of ripeness, creates recipes that celebrate the vast and authentic culinary culture of Baja and Mexico, and even supervises plating just before his labor of love makes it to a guest’s table.

From his mother’s kitchen and the fields of Sonora, stints in innovative restaurants and culinary odysseys to places such as Thailand, Turkey, Spain and Peru, Silva’s pioneering and passionate devotion to authentic, Mexican farm-to-table cuisine and sustainable agriculture remains absolute.

As Michelin-starred chef Francis Reynard puts it: “Over the years Enrique has become a beautiful mix of an entrepreneur, a gentleman farmer, a talented chef, a charming host and a great leader for the farm-to-table movement that has such deep roots in Baja California and in Tamarindos.”